Study regarding the updating of the physical-chemical and biological components evaluation from Danube Delta and the adjacent coastline considering the transboundary impact of the Bastroe channel and establishing a transboundary monitoring system coordinated together with the Ukrainian part, in order to analyze the environmental impact on the Danube Delta Biosphere Reserve of the project regarding the construction of the deep sea navigation channel on the Bastroe branch (2014)

Home Study regarding the updating of the physical-chemical and biological components evaluation from Danube Delta and the adjacent coastline considering the transboundary impact of the Bastroe channel and establishing a transboundary monitoring system coo
In 2004, Ukraine decided to execute the first phase of the deep sea channel construction on Chilia and Bâstroe branches without notifying Romania, considering that the project had no cross-border effects. Between 2005-2006, the Investigation Commission identified several transboundary effects such as: dredging works together with the increasing of sediment concentration, downstream of dredging areas, which will affect the hydrology and fish habitats; the discharge of sediments in the sea will affect the Romanian coastal area; and also both traffic intensification and habitats losing will produce large-scale and long-term cumulative effect on birds and fish. Additionally, the Commission highlighted that these effects are available also for the second phase of the Ukrainian channel execution and subsequently in the exploitation period.
In 2013, during the Mixed Trilateral Romania – Moldova – Ukraine Commission meeting, these countries approached the issue regarding the impact of the Ukrainian project on the Danube Delta. Therefore some measures have been decided in order to improve the cooperation on this issue, particularly regarding the transfer of studies and data collected during the post – project monitoring, joint analysis of these studies as well as joint monitoring in the Danube Delta. Thus, in 2013 a ”Study regarding the quality monitoring of the physical-chemical and biological components from Danube Delta and the adjacent coastline considering the transboundary impact of the Bastroe channel, during 2010-present, and the environment consequences analysis in the Danube Delta Biosphere Reservation and the adjacent coastline determined by the Bastroe Project” was achieved.
Considering the necessity to present the Romanian monitoring results regarding the impact of the deep-sea navigation channel on the Bastroe branch during the trilateral Romania-Ukraine-Republic of Moldova meeting, it was necessary to update the data with new information obtained up to 2014 by the institutes and authorities responsible for the management and protection of environmental factors in the Danube Delta.
In this respect, the project targeted :
Obiectives
The main project objective involves updating the data regarding the evaluation of the physical-chemical and biological components from the Danube Delta and the adjacent coastal area in the context of transboundary impact of Bastroe Channel and establishing a cross-border monitoring system in cooperation with the Ukrainian authorities in order to analyze the impact of the deep sea navigation channel, constructed on the Bastroe branch
Results
In order to analyze and confirm the sturgeons migration routes, in 2013 the researchers from the National Institute for Research and Development in Environmental Protection installed two monitoring systems on Chilia branch, at the confluence with Bastroe branch (upstream and downstream of it) additional to the two systems installed in 2011 in Isaccea and Tulcea. 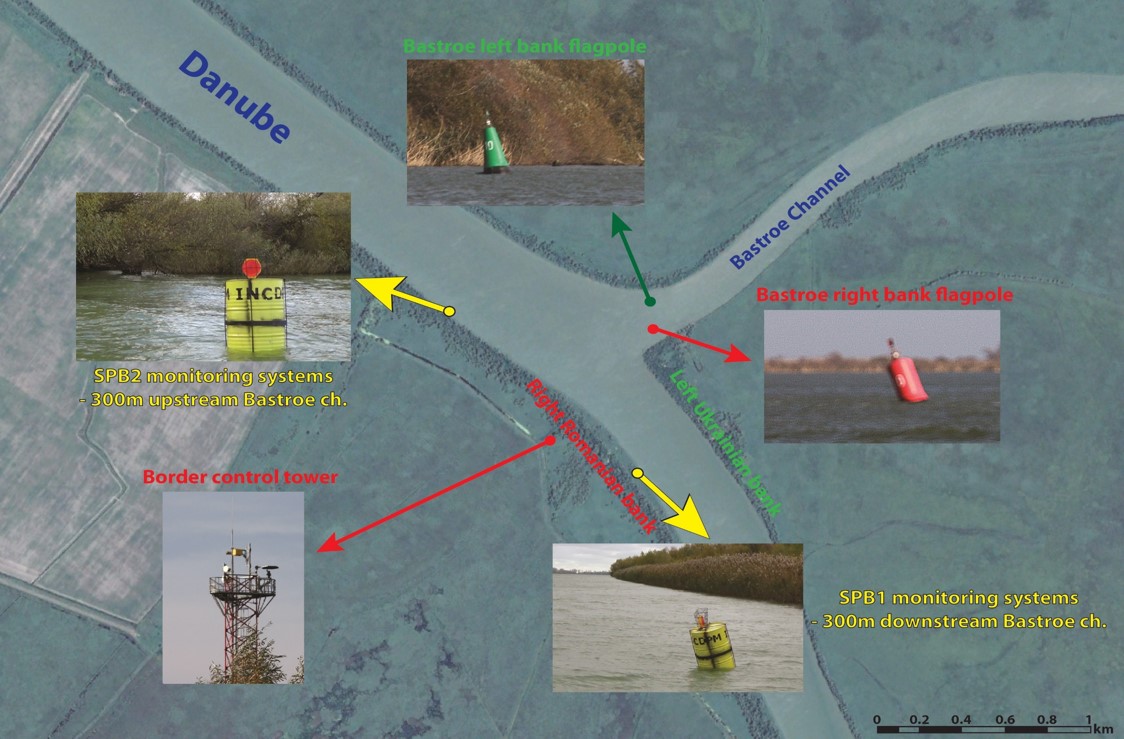 Thus, during the period 2011 – 2014, the researchers of INCDPM Bucharest tagged and monitored during the reproduction migration on the Lower Danube over 250 specimens of sturgeons from the 4 species present on our territory: beluga, stellate, starlet and Russian sturgeons. From de figure presented below can be observed that the Russian sturgeons represents only 1% of the total, situation which requires the identification and application of rapid solutions which will lead to an increase of the population level for this species, otherwise existing the risk that in the near future it will disappear from the Danube area. 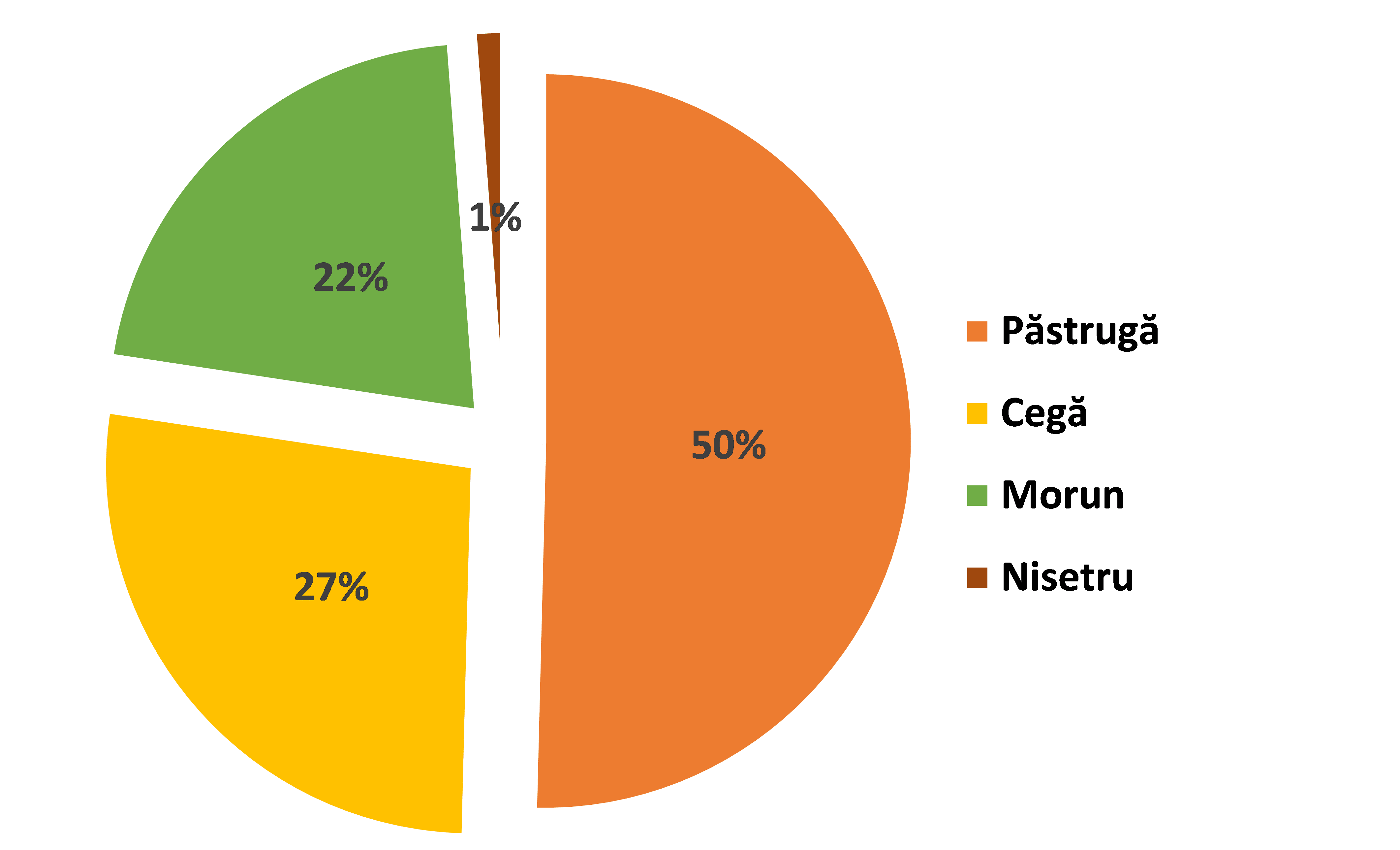 The results of a detailed analysis for 2012-2014 period showed that in 2013, during the autumn period, 69% of all sturgeons descend to the sea used the Tulcea branch, while at the end of the spring migration in 2014 the proportion of specimens which descended to the sea on the Chilia branch was the same as in 2012, namely 53%.
The identified solution regarding the intensification of sturgeon routes monitoring by installing some additional stations upstream – downstream from the Bastroe channel led to an increase of the confidence level regarding the information on the sturgeons’ behavior during their migration.
The research has shown that the sturgeons use as migration routes to the Black Sea the Chilia and Old Stambul branches. In this situation, if the Chilia branch becomes an inert zone related to the possibility of sturgeons migration, in conjunction with the situation encountered on the Sulina branch, the only possibility for the migration of these species, protected under the Convention on International Trade in Endangered Species of Wild Fauna and Flora (CITES), will remain St. George branch, thus presenting a major risk of reducing the possibility for sturgeons migration.